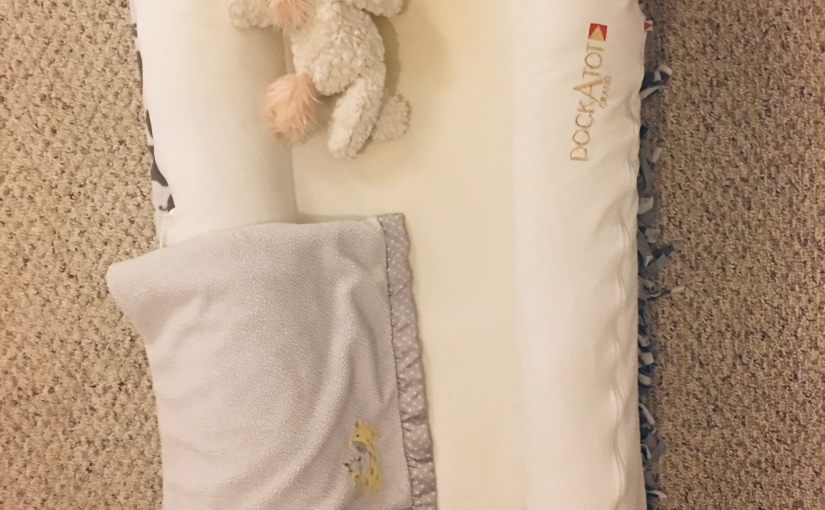 G, has always been on a schedule. It carried over from bringing her home from the NICU and I am just a happier person with a schedule. Everything was great until G was about two months. This “witching hour” happened, except it was not an hour. It was like four to five hours a night. Then G would sleep for maybe three hours. Change, feed, sleep routine, over and over all night long. At the time this started, G was sleeping in a bassinet next to us. This arrangement was not allowing my husband or I any sleep. Thinking back on this season how do us new Moms get so much done on such few hours of sleep?

Many hours were spent scouring though Mom Blogs. About a month into searching and trying out different products I decided I needed a DockATot, like, that day. Unfortunately, not many stores at the time carried them in my area. DockATot website and Amazon would have been great but I needed it yesterday. I called a local kids boutique and they had ONE. Hallelujah. I begged for them to hold it for me and drove right over to buy it. My husband had chest pain when he went to pay for it but he could tell in my eyes how important this was for me.

First night, OMG it lived up to all of my expectations. G went from sleeping two and a half, maybe three hours at a time to five hours straight. This became both of our BFF for sleep.

G was in the deluxe size until about nine months and she started rolling out of it. I upgraded to the Grand and it is still her bed to this day. Pretty sure she could sleep in it until she is four if she wants to. No, I have not tried to have her sleep a night without it. Kinda feel like, “if it is not broke, don’t fix it.” Yes, this is probably overboard but refer to my previous statement.

Every child is different. What one may need to provide them with a comfortable nights sleep is not the same for another. We (us parents) all have our own methods on how this works for us. DockATot was a huge help for this sleep deprived Mom. Two years and an upgraded size later, knowing G has the security of her bed at home and when we travel is huge for me. This is always a top recommendation when people ask me what are the must haves for a new baby.

Just a note on how I clean ours. Usually wash our DockATot once a week. Just take out the padding, and wash on delicate cycle. I do put ours in the dryer until it is almost completely dry and air dry the rest of the way. Takes less then five min to put back together after washing. A stain devolved after months of use under where G rests her head. Not a big deal to me so I never did anything to remove it. Refer to the manufacture guidelines for the best results.

Just a Wife and a Mom learning from my many mistakes. Being a Mom is my greatest JOY. Sharing information on the little Gems we find has become a bit of a passion project. Enjoy the reviews. XO View all posts by Midwest Gal in Cali